Everything You Need to Know Before Becoming Chief Resident 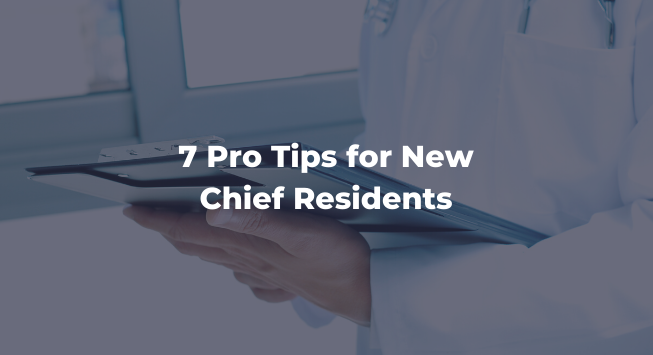 Taking on your new role of Chief Resident is a huge deal! So, for starters, congrats on this honor. This new leadership role is both scary and exciting and you're probably just getting into the swing of things. We've got some advice for you to implement to make it the most successful year that you can. Plus, we've thrown in some tips on growth and learning about yourself, too.


What is a Chief Resident?

What does a Chief Resident do?

The Chief Resident in a medical residency program does everything a resident does, with additional duties like training and recruiting. The Chief Resident is a leader for other residents to look to for insight into the program and education.

When it comes to patient care, usually a group of residents works together to identify symptoms, determine the diagnosis, and create a treatment plan. The Chief Resident will lead this team of residents.

The national average salary for a Chief Resident is$79,981 in the United States. The average medical resident earns$61,497 annually, according to Glassdoor. When you're appointed to Chief Resident, a bump in pay is expected because of the extra responsibility you're taking on.

How to Become Chief Resident

There's a ton of ways you can become Chief Resident, and it's different for every program. For specific advice, like whether or not you need to submit an application, ask your current Chief! Remember, the role of a Chief Resident is one of leadership, so you need to be a leader even before it's time to inquire about becoming Chief. Make sure you're on your game during morning report, help interns, and get to know your PD and assistant PD. Let them know you're interested in more responsibility, and get their feedback.

The role of a Chief Resident involves acting as a liason between the residents and other doctors at the hospital. You can influence resident education, research, and schedules. Most of all, your role will be to shape residents at the program and lead them to success. You may be leading noon conferences and other educational activities for your residents and helping them with board prep.

Tips For Your Chief Residency

If you're just starting your Chief Residency year, there are so many things you can do to be successful. Ultimately, being a great chief boils down to being a great leader and having meaningful relationships with the doctors around you.

Realize the Importance of Mentors

Meet with your Program Director. Often. They will be a great mentor for you during your role as Chief Resident. Your Program Director has "been there, done that," and is a resource for you to go to for help. Set up a weekly meeting with them to go over how things are going and if you have anything you want to bring up and ask for their advice, you will have the opportunity.

If you can, stay in contact with the previous year's Chief Residents, they have been in your shoes and could help with any questions or concerns you have while in the role of Chief Resident. Plus, it's nice to have someone you can talk with who has had similar experiences. 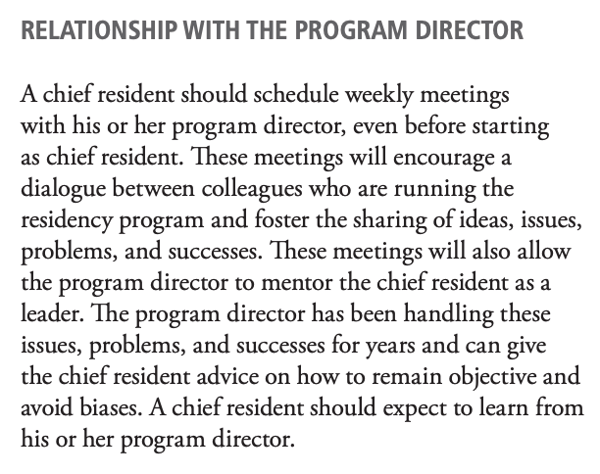 Those who used to be your fellow residents are now seeing you in your new leadership role and it might be hard for them to adjust. Don't take this too personally, it's a natural feeling. Just focus on being a good leader. More on that in the next point!

Be a Fair Leader

If you are closer to some residents more than others, try to be fair when it comes to things like scheduling conflicts. Plus, always get both sides of the story before making a decision. Use your mentors (who we mentioned previously) if you're ever stuck or don't think you are addressing a situation fairly. As a fair leader you are more likely to be respected.

The Administrative and Leadership Roles of the Chief Resident

Organization Is Your New BFF

Do you like highlighters, sticky notes, different color markers, and colored tabs for coordination? All of these tools are going to be your BFF during your time as a chief.

If clutter is getting in the way of your productivity, better organization is the answer. Over time we tend to accumulate files and paperwork. Start decluttering your space by getting rid of or filing away anything you haven’t used in the past few months whether it’s on your desk, in your drawers, or in common workspaces.

Don’t forget about digital clutter. Old files, emails, and folders are taking up space on your computer and wasting your time if you’re having trouble finding what you need. Delete everything on your computer that you don’t need anymore and keep a limited number of programs or files on your taskbar or desktop.

Part of being a leader is holding people accountable. A great way to remove the emotion from situations is to create a paper trail—if residents are switching shifts, have them put it in writing and get your signoff. Then, if you need to have a tough conversation with residents or your Program Director, you’ll have that document as a reference.

u/traumaprotocol gave this advice on an r/medicine thread

A growth mindset is the belief that learning and intelligence grow with experience, effort, and persistence! And that the amount of effort put into overcoming a challenge has a direct effect on success. Setbacks are simply learning nuggets and “failures” are big learning experiences—important stepping-stones on the path to success. This belief allows people to take on big challenges (like being an awesome Chief!) without fear of failure.

Keep up Some Friendly Competition

Use MedStudy Q&As or Flashcards to hold a resident Jeopardy! Bring in an element of fun and some friendly competition to your Friday conferences. Everyone loves game for some team building and bonding, plus, you'll be learning and preparing for the boards at the same time. Two birds, one stone.

You’ve got this! You're going to crush your year as Chief! Have any other tips that you think need to be included? Let us know!

Everything You Need to Know About ABIM Longitudinal Assessment

13 Foolproof Ways to Boost Your Board Exam Passing Score

Everything You Need to Know Before Becoming Chief Resident

How to Manage Anxiety

Unchecked stress can interfere with your attention span, ability to learn new information, and life in general. So if yo...

Tips from Docs on Reddit: How to Be a Good Chief Resident

Onsite vs. Online: Which Learning Environment Is Best for You?

Are you considering a review course for board prep, recertification exams, CME/MOC earning, or just general practice upd...