5 Ways to Make a Difference in Your Office's Culture

This blog is meant to be a resource for physicians treating patients with Acute Respiratory Distress Syndrome during the COVID-19 pandemic. This information has been pulled from our 18th Edition Internal Medicine Core.

ARDS can have a direct or indirect precipitating event. Direct causes include aspiration, pneumonia, and inhalation injuries. Indirect events are sepsis, pancreatitis, multiple transfusions, and trauma. Aspiration and sepsis are the most common. Risk of ARDS increases with multiple precipitating events.

The Berlin definition eliminates the acute lung injury (ALI) category and categorizes ARDS as mild, moderate, or severe based upon the ratio of PaO2/FiO2 and the response to applied positive end-expiratory pressure (PEEP).

The Berlin definition requires that all of the following 4 criteria are met for diagnosis of ARDS:

There is typically a 48–72-hour lag time between the injury and ARDS; it is quicker with neurologic insults and trauma-related ALI. All the factors that lead to the leaky lungs in ARDS are still unknown. Injury results in local edema with subsequent fluid accumulation in the interstitium and the alveoli, compounded by the presence of inflammatory cells and their mediators. The inflammation causes chaos and heterogeneous disease in the lungs, from microthrombi clots in local vessels to aggregates of protein, surfactant, and cellular debris that clog up the alveoli in whorls. Inflammatory cells invade the interstitium and alveoli en masse, releasing more mediators. Eventually, large sections of lung simply collapse, resulting in massive shunting and hypoxemia. The microthrombotic occlusion of pulmonary vessels leads to nonperfusion of ventilated areas, causing dead space and hypercapnia—in addition to severe hypoxemia. 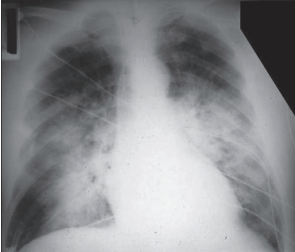 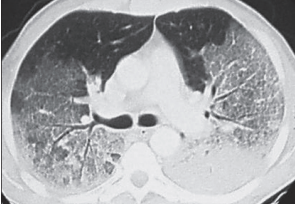 Patients initially present with symptoms of the underlying cause with dyspnea, increased work of breathing, and eventual respiratory fatigue.

With supportive care, patients improve and enter a proliferative phase, where their lungs repair and organize. Usually, this is when they can be weaned from ventilator support. A few patients will go on to develop mild fibrosis as part of healing and will remain ventilator- and/or oxygen-dependent for a prolonged period. A restrictive pattern may be detectable on PFTs even after a year. As yet, there is no prophylaxis for ARDS.

The death rate is 25–58% and has decreased with the use of lung-protective ventilatory support strategies and improved critical care support. The most common cause of death within the first 3 days after the onset of ARDS is the underlying problem! Respiratory failure is not the most common cause of death in ARDS patients after 3 days; it’s nosocomial pneumonia and sepsis.

Making the diagnosis of pneumonia in the patient with ARDS is difficult because infiltrates and leukocytosis are common in ARDS. Lavage fluid in ARDS without pneumonia has nearly 80% PMNs (normally < 5%). Quantitative airway cultures and even BAL are a valid approach to diagnosing pneumonia in these patients. Give antibiotic therapy as indicated by Gram stain, culture, and sensitivity results.

Prevention of pneumonia and other complications of critical illness in the ARDS patient is important. Adequate hand washing and using sterile technique are mandatory.

Treatment of ARDS: Treat the underlying condition and provide optimized cardiopulmonary support. If the patient has an undrained abscess in the abdomen or elsewhere, encourage surgeons to remove it or use interventional radiology to drain it. Give empiric antibiotics if sepsis is thought to be the cause.

Keep patients slightly hypovolemic. However, it is very important to provide enough volume to maintain adequate cardiac output and tissue oxygen delivery. The goal is to prevent worsening lactic acidosis and the resultant multiorgan failure.

The ARDS Network FACT trial (data released in 2006) demonstrated that conservative fluid replacement (targeting normal central venous pressure [CVP], pulmonary artery occlusion pressure [PAOP], and hemodynamic function) was better than a liberal strategy; less (fluid) is more (beneficial). It led to decreased ICU and ventilator time and decreased organ dysfunction. Mortality, however, was similar. This trial also concluded that management with CVP is as good as using a PA catheter. This fluid algorithm can be found at ardsnet.org.

Nutrition should be enteral rather than parenteral, if possible. This reduces the risk of catheter-induced sepsis and may also prevent the translocation of endotoxin and gram-negative colonic bacteria. In recent studies, special formulas high in omega-3 fatty acids have not shown benefit in ARDS and septic shock and are now discouraged.

PEEP stands for positive end-expiratory pressure. On the ventilator, a valve shuts when the patient is near end-expiration, while there is still positive intrathoracic pressure.

ARDS displays shunt physiology. The best way to improve oxygenation is to recruit, or “pop open,” atelectatic and fluid-filled alveoli. At the same time, you want to avoid barotrauma and oxygen toxicity. To avoid oxygen toxicity, try to get a PaO2 of 60 mmHg (7.98 kPa) with Fi O2 < 60% ASAP. To pop open alveolar units, use PEEP. To avoid ventilator-induced lung injury (VILI), use adequate but not excessive PEEP (i.e., the minimum level of PEEP that allows an adequate mean arterial pressure MAP and a safe Fi O2 of 60%).

When managing ventilators, keep in mind the potential for VILI, which arises from overdistended alveoli (from an increased tidal volume [TV] or an increased end-inspiratory plateau pressure) and the cyclic opening and closing of atelectatic alveoli (recruitmentderecruitment). An adequate level of PEEP prevents repetitive closure and opening of lung units.

Recommendations from 2000 from the NIH ARDS Network indicate improved outcome with low TVs = 6 mL/kg and PEEP at adequate levels. (Lung protective ventilatory support strategy is discussed later under this topic.) Initiating low TVs early in the course of the disease appears to be critically important, and 6 mL/kg is considered the optimal TV. Generally, we start worrying about VILI due to excessive plateau pressures at > 30 cm H2O.

Previously, TVs in the range of 12–15 mL/kg had been used, but this is too high for many patients with ARDS because their TLC is much smaller than normal. There is a trend to lower TVs in all patients on ventilators, whatever the cause (although there is no strong data to support a benefit, as there is in ARDS).

A French multicenter trial in 2010 demonstrated improved oxygenation and survival with short-term use of neuromuscular blockade during the first 48 hours of ventilator management of patients with severe ARDS.

The goal in an ARDS patient is to maintain adequate tissue oxygenation—maintaining the SaO2 > 88%. Do not worry so much about the PaCO2. Allow hypercapnia to develop. The resultant acidosis can be corrected by any of the following:

Renal compensation for the respiratory acidosis usually ensues, and typically you do not need to give an alkali or increase the minute ventilation.

To summarize, when using the ventilator in the treatment of ARDS, avoid VILI and oxygen toxicity by doing the following:

The pendulum has swung away from the use of steroids solely for ARDS inflammation. If steroids are used, start early (first 14 days) in moderate-to-severe ARDS.

Check out the next blog in this series: IM Core Excerpt: Invasive Mechanical Ventilation

Everything Healthcare Providers Get for Free Right Now

What the Pandemic Means for Your Upcoming Exam

Change is in the air, and in 2021, the ABIM is moving towards updating their offerings for MOC exam options. Change can ...

August is National Immunization Awareness Month, a perfect time to talk to your patients about vaccines! These important...

3 Immunization Pearls You Need to Know

August is National Immunization Awareness Month, a perfect time to talk to your patients about vaccines! These important...