Written by Maddy Hessel
Recently, the United States Medical Licensing Exam (USMLE) put out a statement indicating that they’re making adjustments. Here's everything you need to know about how the USMLE Step 1 exam is scored:


“The USMLE program will change score reporting for Step 1 from a three-digit numeric score to reporting only a pass fail outcome. A numeric score will continue to be reported for Step 2 and Step 3. This policy will take effect no earlier than January 1, 2022…”

The USMLE exams are a 3-exam series of assessments that provide state medical boards with info regarding a medical licensure applicant’s knowledge and skills to practice medicine.

For med students, the USMLE exams are mostly known as the assessment tool residency programs use to screen residency applicants. And they’re immensely important to med students for that reason—the higher your USMLE score report (especially Step 1 & Step 2), the higher likelihood of being accepted into the residency program of your choice.

In recent years, the USMLE Step 1 scores were numerical scores for this exam, used in ways that the exam wasn't created for—like assessing a med student’s academic achievements during the residency application process.

Since their conception, the USMLE has positioned the exams as designed to report to state medical boards that a med school graduate has the skills and knowledge to practice medicine. Any use other than this (including using the USMLE score report in the residency application/selection process) is a secondary use, and not what the exam was designed for.

In March of 2019, the USMLE hosted a conference called InCUS: Invitational Conference on USMLE Scoring, where they invited 5 organizations [The Association of American Medical Colleges (AAMC), American Medical Association (AMA), the Educational Commission for Foreign Medical Graduates (ECFMG), the Federation of State Medical Boards (FSMB) and the National Board of Medical Examiners (NBME)] to gather to discuss the USMLE exams. They wanted to collaboratively review the numeric USMLE score report within the context of licensure, as well as secondary uses and broader topics.

There's a big impact on medical schools and medical students, in regards to USMLE exams, according to the InCUS summary:

This group of stakeholders explored 10 potential paths forward, including the shift of all or part of USMLE to pass fail. There was a general consensus among the participants, which led them to recommendations that included making the Step 1 exam pass fail in order to reduce the overemphasis on USMLE performance in residency screening and selection.

Okay… But Won’t These Changes Just Place More Emphasis on the Step 2 Exam?

That’s the major feedback we’re seeing from those who are impacted (med students) by the Step 1 pass fail. And there has been a growing trend in residency program directors looking at USMLE Step 2 scores to screen applicants.

Participants at the InCUS conference talked through 3 options (not just the pass fail option!) to change the USMLE’s current reporting practices: Pass Fail of Step 1 alone or the entire USMLE sequence, tiered scoring, or a composite score of both assessments (Step 1, Step 2). Ultimately, they decided to make USMLE Step 1 pass fail, get rid of the Step 2 CS exam, and keep using numerical scoring for the Step 2 CK exam. Students are required to USMLE Step 2 score of at least 209 in order to pass.

Because of this change, students and residency programs are now focusing more on the Step 2 exam score. This seems like it would just shift the stress from Step 1 to Step 2, but it actually reduces opportunities for students to rate their performance numerically—which will surely decrease rates of depression among medical students. Getting students into that mindset even earlier in their education is also shown to increase resiliency.

There’s still a ton of unknowns for medical students. How will these changes impact DO students? International students? How will students stand out during the residency application process?

And there are some potential benefits, too. The Step 1 Exam is widely known as the assessment that’ll make or break the career medical students have been working at for years—making it pass fail will potentially decrease the level of stress for students, and maybe even allow them to focus on other facets of their medical education.

Standardized tests historically bias against those who lack resources to adequately prepare. Moving to a pass fail scoring will open doors for minorities and increase diversity in residency programs.

This topic came up again and again at the conference. Participants reached a consensus that included that the UME-GME transition system has negatively impacted diversity. Among their goals for the USMLE program was to “minimize racial demographic differences in USMLE performance.”

The USMLE program is working to find solutions for this lack of diversity, including additional collaborative and grant-funded research, and working with medical schools to develop model USMLE prep programs. 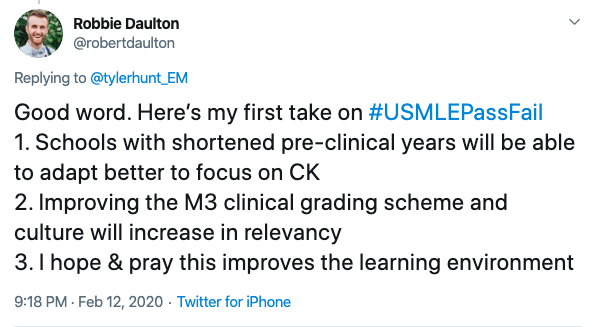 For residency program directors, we can only hope that they’ll lean less into exam scores in the residency application process and look at other areas that students excel in—but it’s unlikely that there will be major changes in their process, especially with the Step 2 and Step 3 still being given a numerical score. It's likely that PD's will place even more importance on an applicant's USMLE Step 2 score.

Other Changes in the USMLE Score Report

Along with making the USMLE Step 1 pass fail, the USMLE also announced that they would be reducing the number of allowable attempts on each Step Exam from 6 to 4 attempts. They’re also going to start requiring all examinees to receive a USMLE Step 1 passing score before taking Step 2.

It will be. You can expect these changes to go into effect in 2022.

Always stay in the know about medical school news by following us on Instagram.

6 Ways to Cope with Anxiety in Med School

The exciting possibilities of med school come with real challenges. You’re in an unfamiliar environment with new people,...

How to Create Stronger Memories When You Study

Updated 9/17/21 Your semantic memory (or recall of facts) is critically important to your career in medicine. Sure, it p...