Everything Pediatricians Need To Know About Celiac Disease

National Celiac Disease Awareness Day is coming up on September 13th. We've pulled some high-yield information from the Gastroenterology section of our Pediatrics Core to help you tackle your review of celiac disease.

Celiac disease (a.k.a. celiac sprue or gluten-sensitive enteropathy) occurs in genetically predisposed children and adults after exposure to specific gluten proteins and resultant intestinal inflammation and damage due to immunological cross-reaction. In susceptible individuals, gluten from wheat products (and similar proteins found in rye, barley, and malt) can induce the immune reaction to human transglutaminase and the resulting mucosal damage.

Celiac disease is a common disorder, and many studies using serology-based screening have determined the incidence to be 0.5–2% (between 1/50 and 1/200) in the general population of the developed world, with considerable racial differences. Non-Hispanic Whites have ~ 4–8× the risk of celiac disease than do other populations. There is also evidence that the overall incidence has been increasing over the past 20 years. Remember, celiac disease is not the same as a wheat allergy, which is a Type I hypersensitivity to wheat proteins causing mast cell degranulation, or non-celiac gluten sensitivity (a.k.a. “gluten intolerance”). This is a nonallergic clinical response to dietary gluten similar to IBS.

Human leukocyte antigen (HLA) typing shows only 2 HLA types are associated with celiac disease, DQ2 and DQ8. Penetrance is variable, and people with known genetic markers for celiac disease do not necessarily develop it. Initially the immune response occurs in the duodenum, but it eventually spreads to the jejunum and ileum. The mucosal lesions are characterized by increased numbers of lymphocytes, plasma cells, and macrophages in the lamina propria and by increased numbers of intraepithelial lymphocytes. Patients with DQ2 or DQ8 are also at increased risk for autoimmune thyroiditis and Type I diabetes, so many clinicians screen for celiac disease regularly in these populations.

Presentation of Celiac Disease In Children

Clinically, patients can present with a variety of symptoms. The classic GI form of the disease presents in the child < 2 years of age, with symptoms that include malabsorptive diarrhea, poor weight gain, abdominal distention, and proximal muscle wasting. If the malabsorption is significant, look for resulting vitamin D deficiency and hypocalcemia in the patient who presents with seizures and hypocalcemic tetany. Iron deficiency anemia is common at diagnosis, and unexplained iron deficiency should prompt you to look for celiac disease. Some patients present without any of the classic gastrointestinal complaints, and only have growth failure, delayed puberty, rash, or oral ulcers. You should have a low threshold to check celiac serology in these situations.

Dental enamel defects are more common in patients with celiac disease. The defect occurs symmetrically and in the secondary teeth, especially the incisors. The abnormalities include brown or yellow opacities, pits, or grooves.

What is Dermatitis Herpetiformis?

Dermatitis herpetiformis is an itchy, vesicular rash that erupts symmetrically on the extensor surfaces of the arms and legs and on the buttocks. It can occur with or without GI symptoms. The lesion is pathognomonic for celiac disease (Figure 10-12). Figure 10-12: 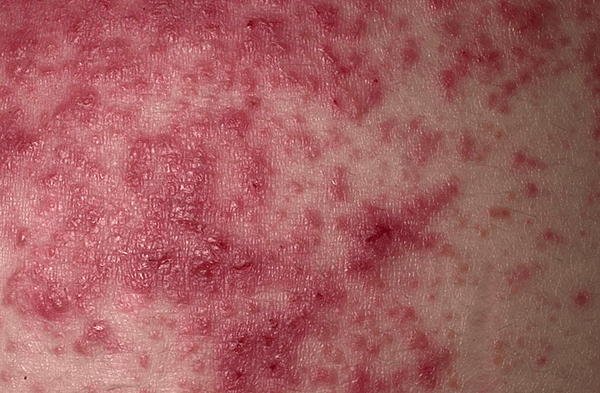 Dermatitis herpetiformis (DH). DH is a chronic vesicular eruption that is extremely pruritic and symmetric in distribution.

Comorbid autoimmune disorders are common with celiac disease and can include Type 1 DM, autoimmune thyroid disease, Sjögren syndrome, collagen vascular disease, liver disease, and IgA glomerulonephritis. Celiac disease is so common in children with Type 1 DM and selective IgA deficiency that many physicians recommend universal screening for both diseases in these patients.

How To Diagnose Celiac Disease

IgA tends to be a better immunoglobulin to test than IgG because tTG-IgA is involved in the disease—and it is secreted into the gut lumen.

If the serologic testing is positive (or if clinical suspicion is high in the face of negative serologic testing), confirm the diagnosis with a biopsy of the small intestine. Important: Do not place the patient on a gluten-free diet prior to endoscopy because this can cause a false negative result.

There are 2 mandatory requirements for diagnosis:

How To Treat Celiac Disease

Treat with dietary exclusion of gluten (wheat, barley, and rye). Preventing exposure to these products is the only way to make symptoms go away, including the dermatitis herpetiformis. An increasing number of commercial products are becoming available to these patients. You can monitor for low or zero anti-tTG levels to determine if gluten and other products are being effectively excluded from the diet.

You can read more about celiac disease in the Peds Core, available in both Print and Digital formats

For more on the treatment of celiac disease, see the Gastroenterology section of our Pediatrics Core. The Core is a great refresher for boards or for your daily practice. We'll let you know about other important awareness days and where to go in the Core to brush up.

Already have the printed Pediatrics Core? Start on page 10-23 in Book 2 to brush up on the treatment of celiac disease and other intestinal disorders in children.

Have the digital Pediatrics Core? You can search specific terms like celiac disease to bring up all the relevant pages.

During our last Pediatric Board Review Course, we were able to pull Paul Catalana, MD, MPH, FAAP aside from his course d...

Sneak Peek! See the Schedule for the 2022 Pediatrics Review Course

You don't want to miss the only Pediatrics Online Review Course of 2022 coming up From February 5-10th, review all of th...

CME and MOC: Catch Up, Then Plan for the Future

Fall of 2021 is here, and that means the end of the year will be here before you know it. Have you been putting off earn...